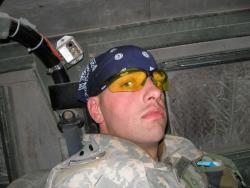 A Gilmanton soldier was killed in Iraq on Thursday when his vehicle hit an improvised explosive device. Pfc. Nicholas R. Cournoyer, 25, an infantry soldier with the 10th Mountain Division out of Fort Drum, was killed while riding in a convoy in the vicinity of Baghdad on May 18, 2006 at 2:30 p.m. Iraq time, said Maj. Greg Heilshorn, a spokesman for the New Hampshire National Guard.

Other soldiers were killed in the attack, Heilshorn said, but no details were available last night. Cournoyer is the 10th New Hampshire serviceman killed in Iraq since the start of the war.

Cournoyer, a 2000 Gilford High School graduate, had always wanted to be a soldier, said Heilshorn, who was asked by Cournoyer's family to speak to reporters on their behalf.

Cournoyer worked as a mason's assistant until he joined the Army in January 2005, Heilshorn said. He had been in Iraq for almost a year and was expected to come home this summer.

"Nic was a great man for the short time I knew him".